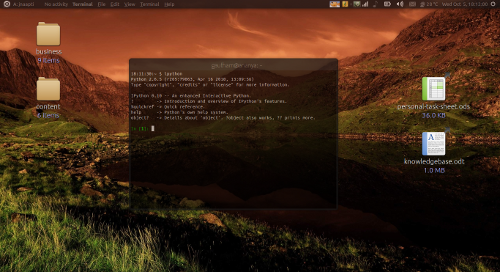 In order to get Reliance USB Data Card to work in Ubuntu, follow these steps:

That’s it! You must now be able to browse the Internet. In order to disconnect press Ctrl+C.

END_OF_DOCUMENT_TOKEN_TO_BE_REPLACED

I am one of those many people out there who had trouble in getting Rosegarden to “sing” in Ubuntu under Gnome Window Manager. Finally after trying a lot of permutations and combinations, I got Rosegarden to work. I made this post to share what I did so that others don't have to go through the same trouble I did!

Rosegarden requires some other applications to be installed in your system. So before you fire up Rosegarden ensure that you have the following:

If you don't have any of these you could execute this:

Ok, now we have everything we need. Let's proceed to the configuration steps:

Click on Setup
Here are the settings I used: Ok, it's time to fire up Rosegarden. Ensure that the connections are right in Jack Audio Connection Kit (Connect): Play one of the sample files and you should hear music!

In case your Jack server is not running, you might want to execute this command and then start the Jack server:

One of the readers of this post, Jason Friedman, sent me this information via mail:

I read the information you posted about rosegarden at http://gauthampai.livejournal.com/62383.html and it was _very_ helpful. Thank you for posting it.

Note: This is not for the casual reader. If you are facing any issues with any of the keywords mentioned above, you might want to continue…

So here I was trying to install some packages from a YUM repository on my Ubuntu 8.0.4 system. Why YUM when you have apt-get? Well, let's just say, the situation demanded it.

The installation seemed to be going fine. What I did not realize is that, the installation had innocently relinked my libc files to a new location (actually to an older version of libc). The yum installation failed. Without checking the error, I executed sudo yum install again.

And I got this:

Next I executed ls. Same error! And soon I realized, I was not able to execute most of the commands. The only things running were, things that were already open. I had closed my terminal by then, and was not able to bring it back neither was I able to login in an alternative terminal.

It is extremely difficult to figure out what has gone wrong without a terminal. I tried out various things, but I soon realized that since I don't have sudo access anymore, I won't be able to fix anything in the /lib directory, so no point trying.

The only solution was to reboot in recovery mode and then see if I could relink the libc files. So I popped in the Ubuntu live CD.

Now here is an added twist to the tale. I run Ubuntu on Wubi. So how do I mount my NTFS 'file' which is actually a Linux partition?

With some pointers from my colleague, I realized that it is possible to mount a file as if it were a filesystem. I executed this:

Guess what! The Wubi file got mounted and I was able to access the files.

After some inspection I realized that the problem was that, while Ubuntu has all the libc files in /lib/tls/i686/cmov, the message indicated that these files should be in /lib/tls.

I did a 'ls' in the /lib/tls directory and found that there are some files of an older version of glibc at this location but the live cd version didn't have any files there. So it was apparent this is what is causing the problem.

I unlinked all the files, and relinked them to the new location and rebooted.

This time although it was able to boot Linux, it did not bring up the UI. I booted once again in recovery mode and ran xfix and continued with the boot.

Update: Not everything was fine. Some applications, like Totem threw a SEGFAULT. So I did this: